What to know about birthmarks

Very few birthmarks cause significant medical problems. Although some people request surgery to remove birthmarks, few of these procedures occur due to medical necessity.

In this article, we cover several types of birthmarks and their causes, as well as possible complications of a birthmark and treatments to reduce their risk of becoming harmful. 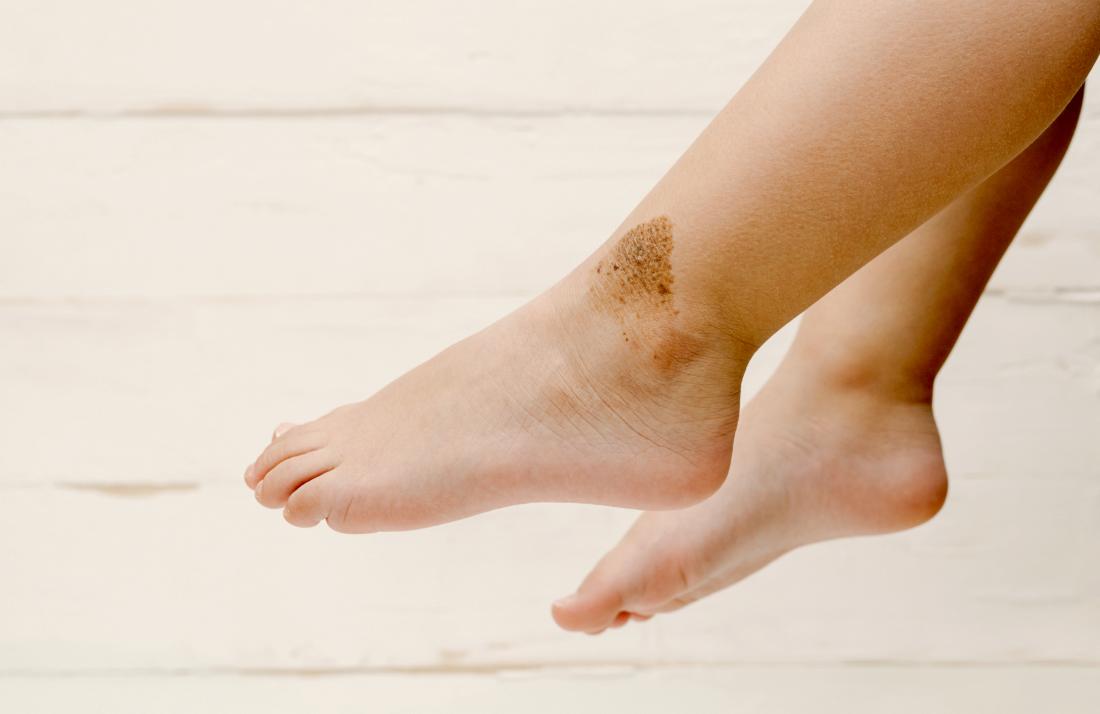 A birthmark is a blemish on the skin that is visible from birth or shortly afterward.

Researchers do not yet fully understand why some babies have birthmarks and others do not.

That said, some have hypothesized that a buildup of cells that line the blood vessels of infants may cause strawberry marks to occur.

Some doctors believe that a tiny piece of placenta may become lodged inside the developing embryo very early on in the pregnancy.

If damage occurs to the nerves that control the widening or narrowing of capillaries, there is a chance of port-wine stains, especially if the capillaries permanently widen in one area.

Also, many experts believe that some proteins produced by the placenta during pregnancy may be linked to a higher chance of developing some types of birthmark. 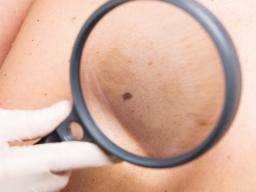 Should I worry about a mole?
Here, learn about moles and how to recognize when they pose a health risk.
Read now 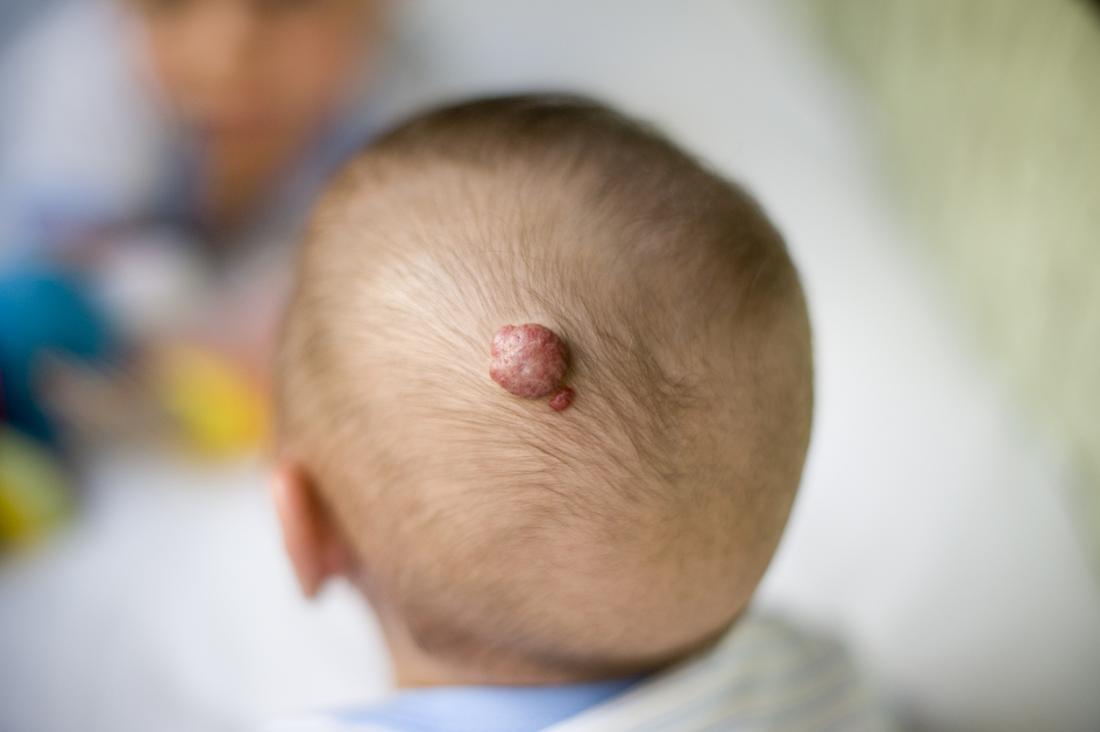 A hemangioma, or a "strawberry mark," is a red, raised mark on the surface of the skin. Many are initially small and flat.

It is impossible to know whether or not a hemangioma will grow later on. Usually, they grow quickly during the baby's first 4–5 months of life. After this, the growth rate of the birthmark slows down, and it many eventually fade.

For some infants, the skin may become stretched or deformed, especially if the mark is large. 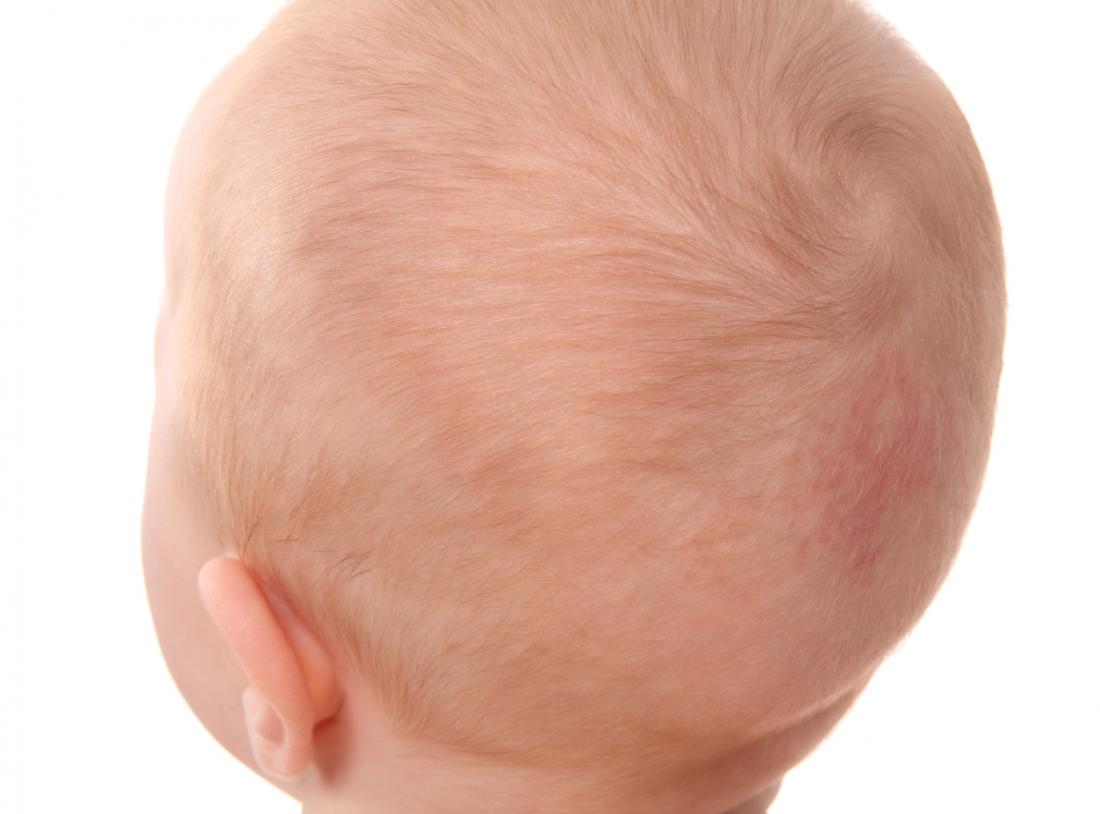 Telangiectatic nevus birthmarks have numerous other names, including nevus simplex, salmon patch, stork mark, and stork bite. They occur due to the expansion and buildup of tiny blood vessels in the skin.

Telangiectatic nevus shows as slightly reddened skin. When it occurs on the face, some people call it an "angel kiss." This type will usually fade within a couple of years, but it may become visible when a child cries.

When telangiectatic nevus occurs on the back of the neck, some people call it a stork mark. Stork marks may remain visible, but hair usually covers them. 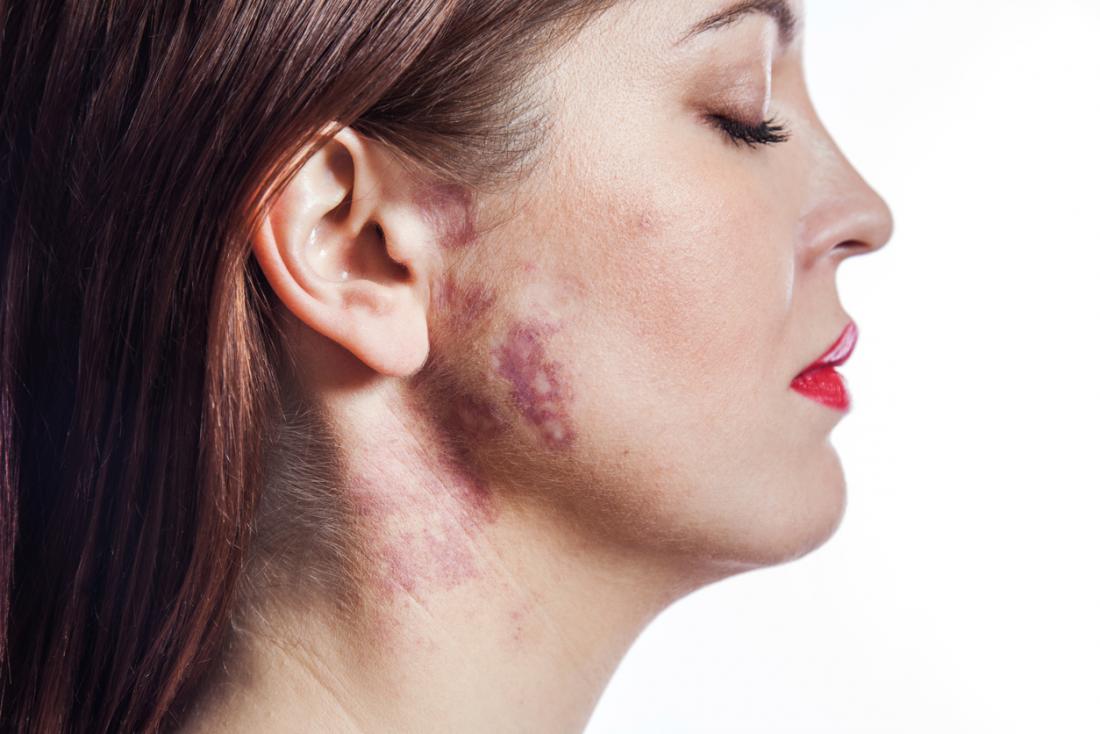 These are red or purple marks that commonly develop on the face but can occur anywhere on the body. The abnormal leaking of blood vessels in the affected area causes port-wine stains. They may vary in size from a few millimeters to several centimeters.

Without treatment, they may eventually get darker. 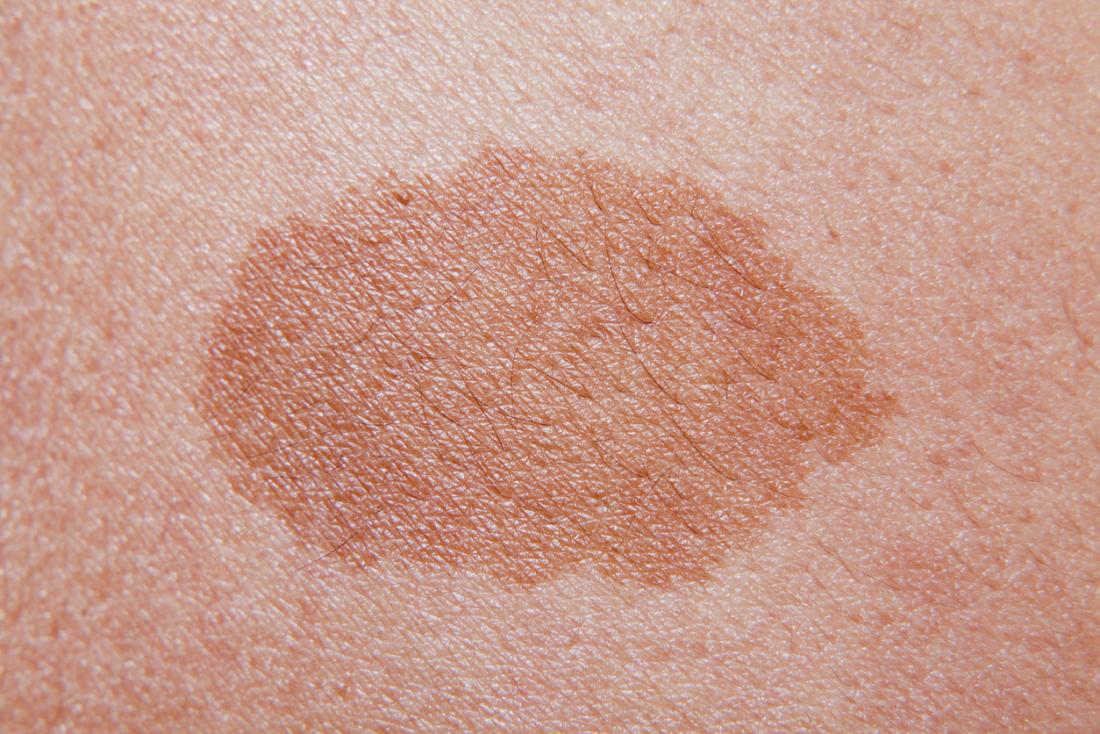 These are usually oval in shape and light brown.

These marks are either present from birth or develop soon afterward. As people get older, the marks do not fade. Some people may have one or two, but more may occur in some people.

People with more than four cafe au lait birthmarks may have neurofibromatosis, a genetically inherited condition in which the nerve tissue grows tumors. These growths may be harmless but can sometimes cause serious damage by putting pressure on the nerves and other tissues. 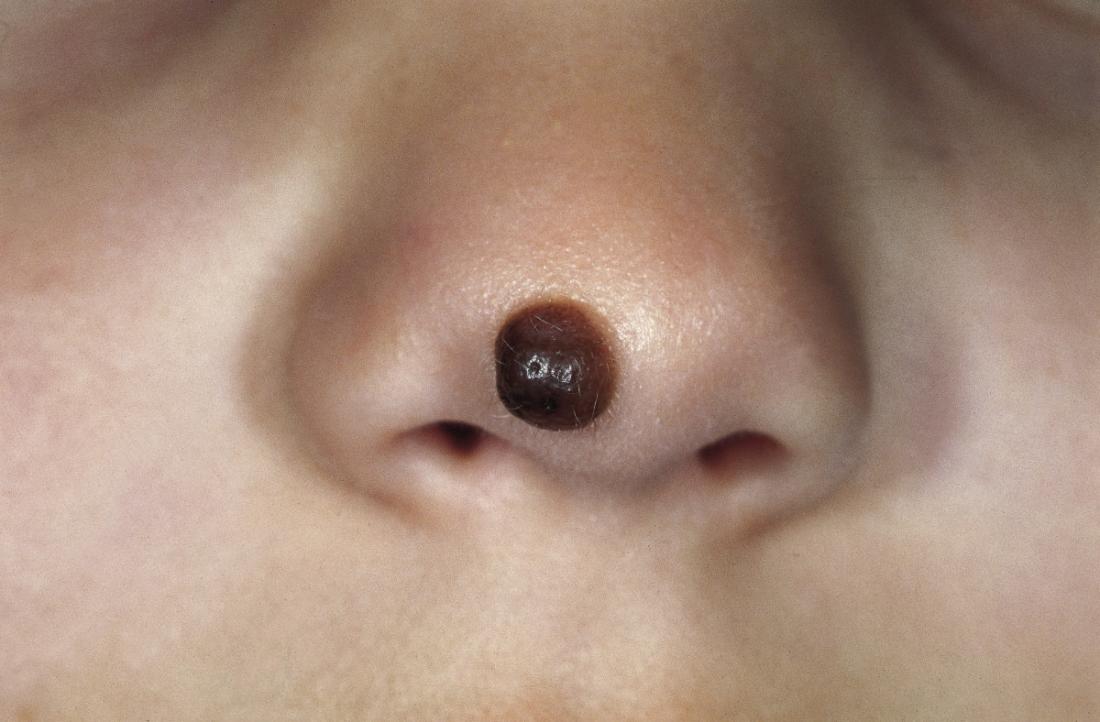 These birthmarks can occur in any part of the body.

This type of birthmark is usually light brown on light skin. People with darker skin might experience congenital melanocytic nevus as an almost black mark.

It can have an irregular shape and may be flat, raised, or lumpy. They are relatively large brown or black moles. As the baby grows, the marks become proportionally smaller.

Sometimes, they may darken or develop hair during puberty.

A small birthmark of this type is not a cause for medical concern. 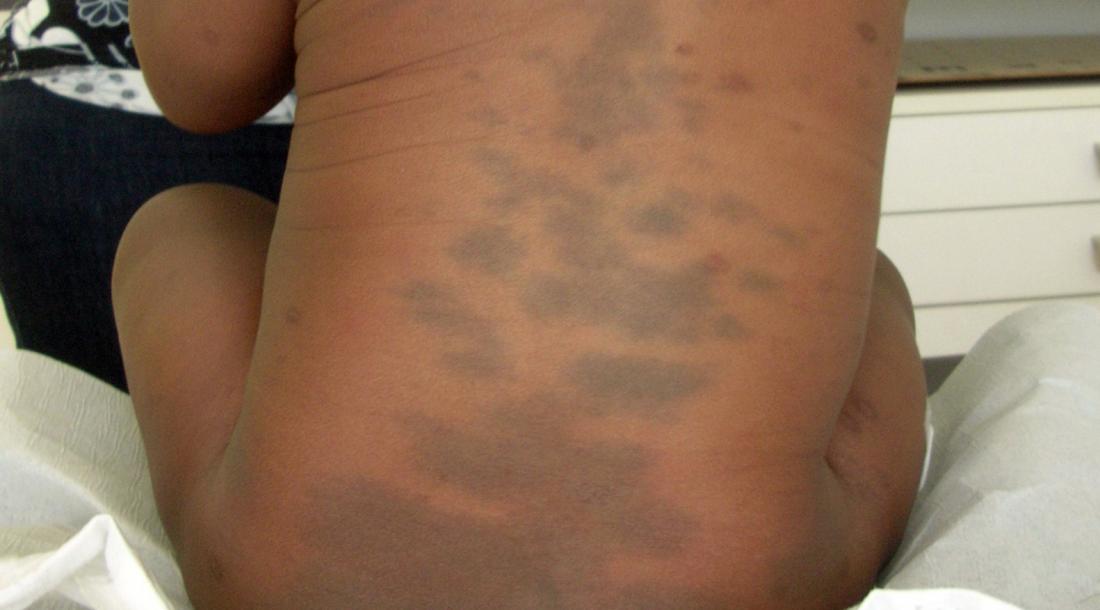 These are blue-gray marks that are more common in people with darker skin. The mark may appear bruise-like and develop on the lower back or buttocks.

These are harmless and will usually fade by the time a child is about 4 years old. 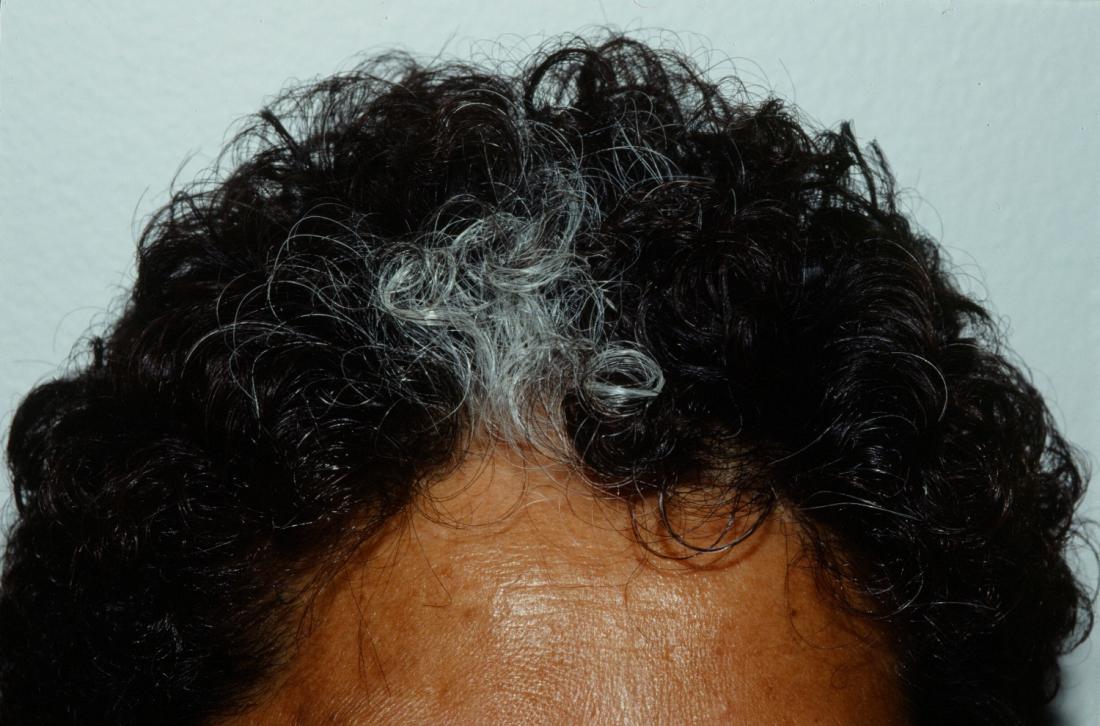 Parents can pass this birthmark onto their children in the genes. It presents as a silver streak of hair that usually develops at the right or left side where the forehead and hairline meet.

The vast majority of birthmarks pose no long term health problems. Many of them eventually fade away.

That being said, some birthmarks, including strawberry marks, may turn into an open sore and develop an infection if they are in an area that is frequently irritated.

According to the Genetics Home Reference library, people with a giant congenital melanocytic nevus have a 5–10% chance of developing melanoma, which is an aggressive skin cancer.

Also, if a port-wine stain occurs around the eye, there is a higher risk of developing glaucoma.

A child with a strawberry mark on the eyelid requires prompt treatment, otherwise their risk of experiencing vision problems increases.

Likewise, a strawberry mark that interferes with breathing or feeding may be life threatening and requires rapid treatment.

Very rarely, port-wine stains can occur due to Sturge–Weber syndrome, a condition of the blood vessels that affects the eyes, brain, and skin. 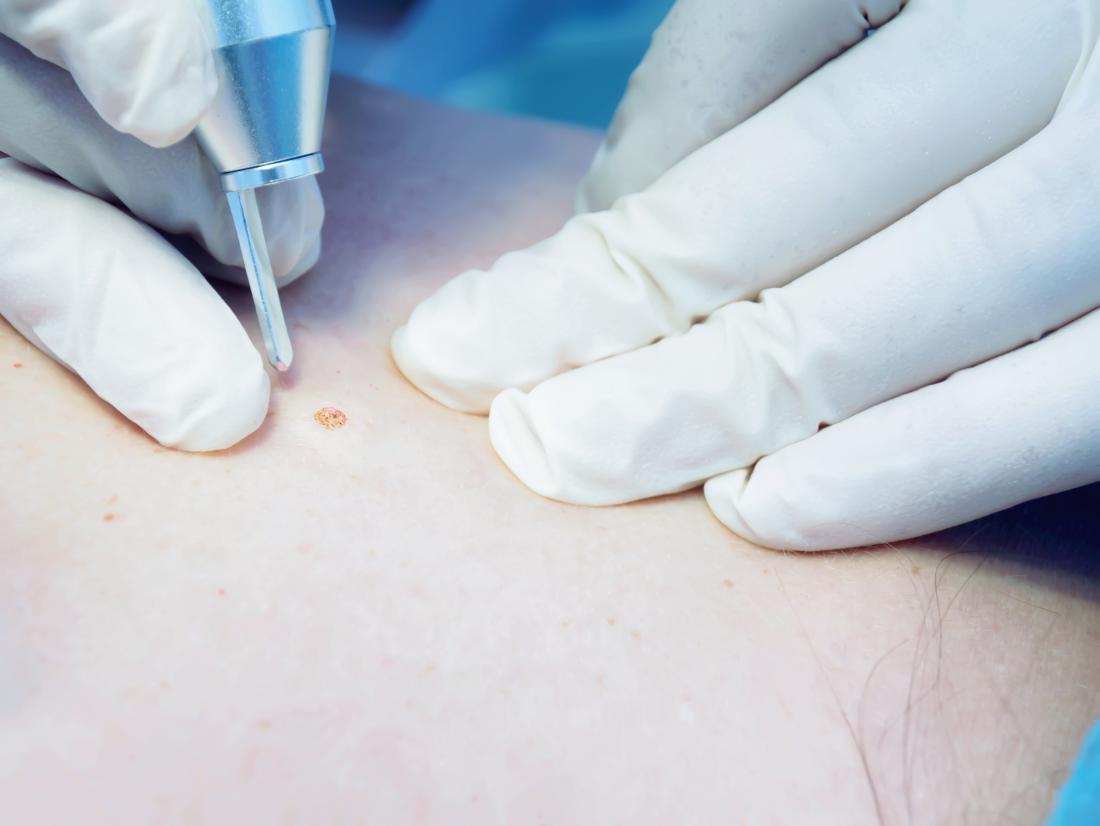 Laser surgery is an option for treating a birthmark.

A significant number of birthmarks fade away without treatment.

However, if the birthmark causes health problems, or if a person feels strongly about getting rid of it, a doctor may recommend treatment.

Treatment can sometimes be painful, and it is not always effective. Unless a birthmark causes problems with sight, feeding, hearing, or breathing, caregivers should try to weigh the potential risks of treatment with the anticipated benefits for the child. Not all birthmarks are treatable.

A doctor can usually make a fairly accurate prediction of how a child's birthmark will progress. If they believe that a birthmark requires treatment, they may suggest one of the following options:

Treatment options depend on several factors, including the type, location, and severity of the birthmark.

However, the majority of birthmarks do not cause health problems and will fade over time.

Is birthmark removal covered by insurance if there is no medical risk?

Health insurance does not typically cover birthmark removal for cosmetic reasons alone. There may be exceptions for certain large, prominent birthmarks in locations such as the face.

As many birthmarks change during childhood, often becoming smaller or lighter, waiting until adolescence or adulthood to decide on cosmetic treatment may be the best option.

Karen Gill, MD Answers represent the opinions of our medical experts. All content is strictly informational and should not be considered medical advice. 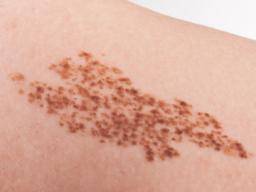 What's to know about neurofibromatosis? Neurofibromatosis is an inherited disorder of the nervous system in which tumors develop on nerves, leading to a range of complications. Neurofibromas are usually non-cancerous and grow on the nerves of the skin, and sometimes on nerves deeper inside the body. Find out about the different types and treatments. Read now 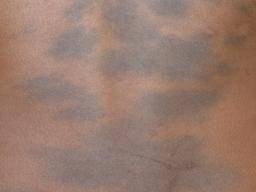 Recognizing and treating Mongolian spots Mongolian spots are a type of birthmark that looks similar to a bruise. They are thought to be completely harmless but can be unsightly. The cause is unknown, and Mongolian spots are said to be related to pigment in the skin. Learn about the causes and treatments, and how the condition appears on skin. Read now 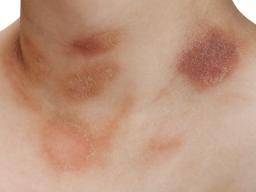 What's to know about pityriasis rosea? Pityriasis rosea is a largely benign skin rash that often appears to be more severe that it actually is. It may be accompanied by a feeling of unwellness. The condition normally clears up within 12 weeks without treatment. The MNT Knowledge Center take a look at its symptoms, causes, diagnosis, and treatment options. Read now 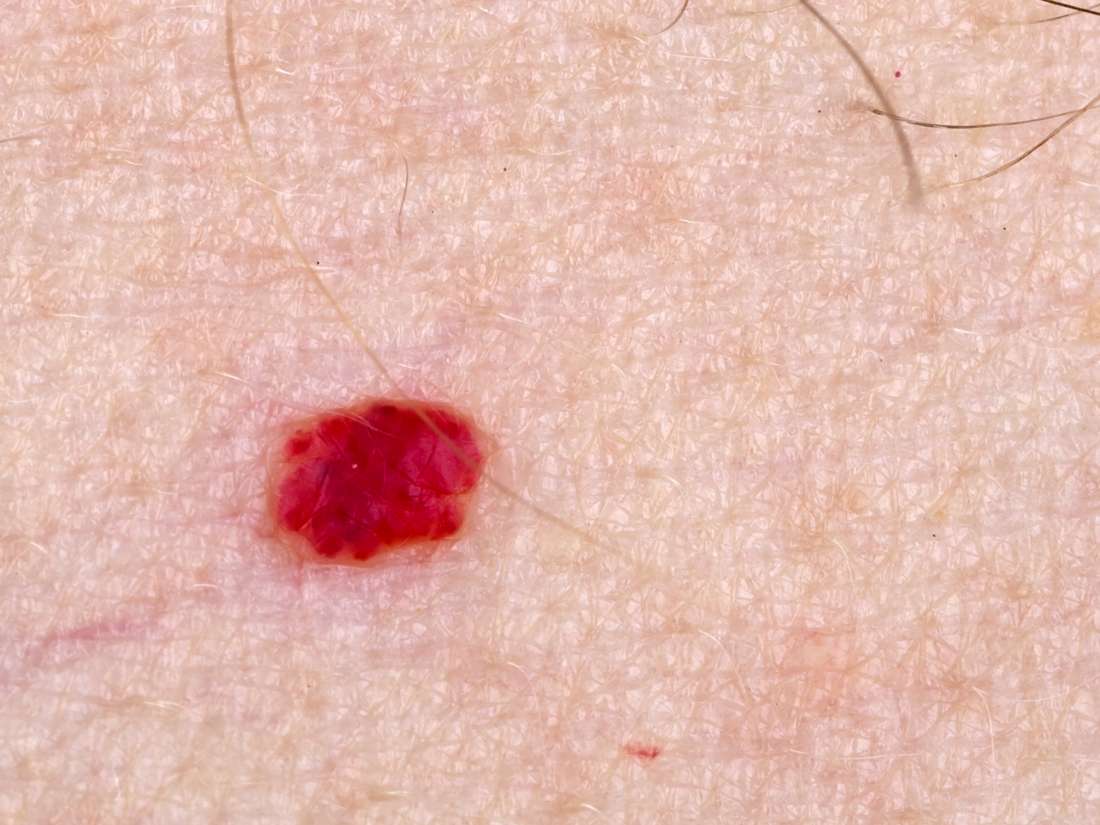 All you need to know about external hemangiomas External hemangiomas are birthmarks that appear when extra blood vessels develop. They are a type of benign tumor. Most people only develop one, and it will often go away without treatment. Some people will need medication and others surgery, though this is rare. Some tips can help people to avoid scratching them. Read now 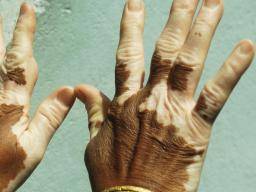 Understanding the symptoms of vitiligo Vitiligo is a long-term skin problem that produces white patches of depigmentation on certain sections of skin. Find out about the causes and treatments. Read now
email email
print
share share
Dermatology
Pediatrics / Children's Health

Visit our Dermatology category page for the latest news on this subject, or sign up to our newsletter to receive the latest updates on Dermatology.