Everything you need to know about hay fever

It is caused by an allergic response to airborne substances, such as pollen. The time of year it happens depends on what substance, or allergen, the person reacts to.

Despite its name, hay fever does not mean that the person is allergic to hay and has a fever. Hay is hardly ever an allergen, and fever is not a symptom.

Allergic rhinitis is the fifth most common disease in the United States (U.S.).

Here are some key points about hay fever. More detail is in the main article. 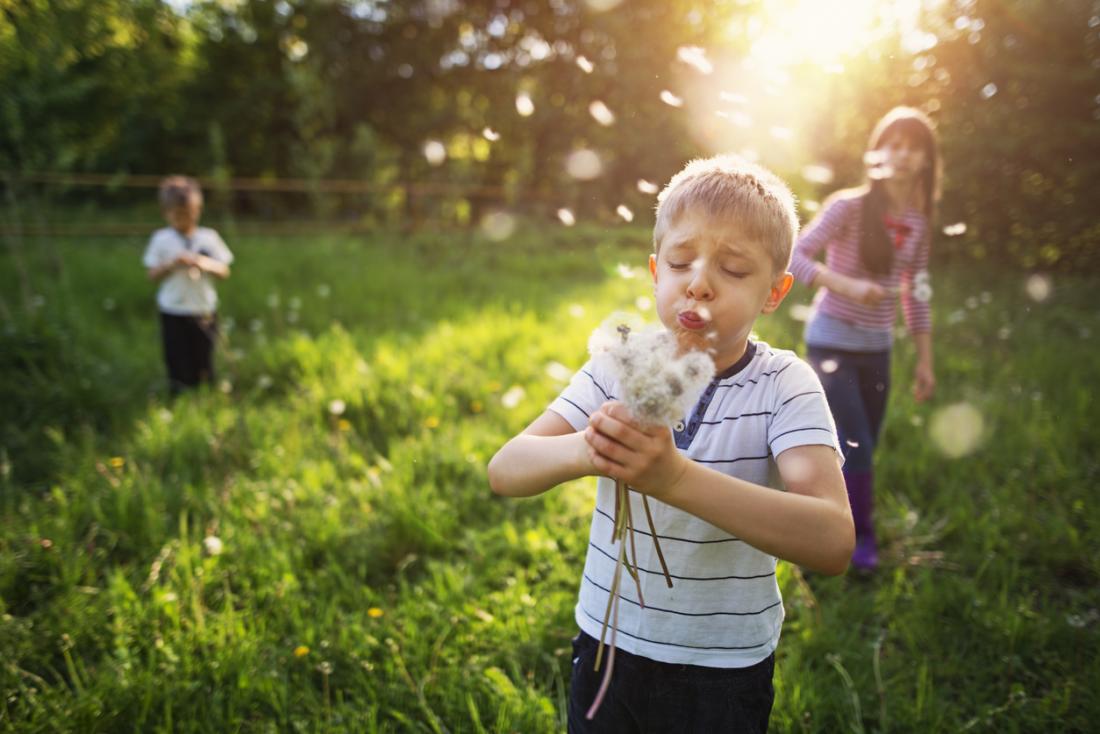 Hay fever is sometimes, but not always, related to pollen.

Symptoms can start at different times of the year, depending on what substance the patient is allergic to.

A person who is allergic to a common pollen will have more severe symptoms when the pollen count is high.

Severe symptoms may include:

Some people may experience tiredness or fatigue, irritability, and insomnia.

People with asthma may experience more wheezing and breathlessness at times when hay fever symptoms are common.

A range of over-the-counter (OTC) treatments can help manage hay fever. Sometimes, a combination of two or three is best. A physician can advise about options.

Antihistamine sprays or tablets: Commonly available OTC, these stop the release of the chemical histamine. They usually effectively relieve symptoms of a runny nose, itching, and sneezing, but they will not unblock congested sinuses. Older antihistamines can cause drowsiness.

Eye drops: These reduce itching and swelling in the eyes. They are usually used alongside other medications. Eye drops often contain cromoglycate.

Nasal corticosteroids: These sprays treat the inflammation caused by hay fever. They offer a safe and effective long-term treatment. It may take a week for benefits to show.

There may be an unpleasant smell or taste, or nose irritation.

Oral corticosteroids: Severe hay fever symptoms may respond well to prednisone tablets, prescribed by a doctor. These are for short-term use only. Long-term use is linked to cataracts, muscle weakness, and osteoporosis.

Immunotherapy: Immunotherapy can provide long-term relief by gradually desensitizing the immune system to the allergens that trigger the symptoms. It is usually received in the form of allergy shots or sublingual drops for people whose symptoms are serious and have not cleared up following other treatments.

Immunotherapy may lead to lasting remission of allergy symptoms, and it may help prevent the development of asthma and new allergies.

Injections are given by a doctor, but sublingual immunotherapy, or medication that is dissolved under the tongue, can be taken at home.

Alternative therapies that claim to treat hay fever include acupuncture, but study results have not confirmed significant improvements.

No herbal remedies are recommended.

During pregnancy, it is important to speak to a doctor before taking any medication, to prevent potential adverse effects on fetal development. 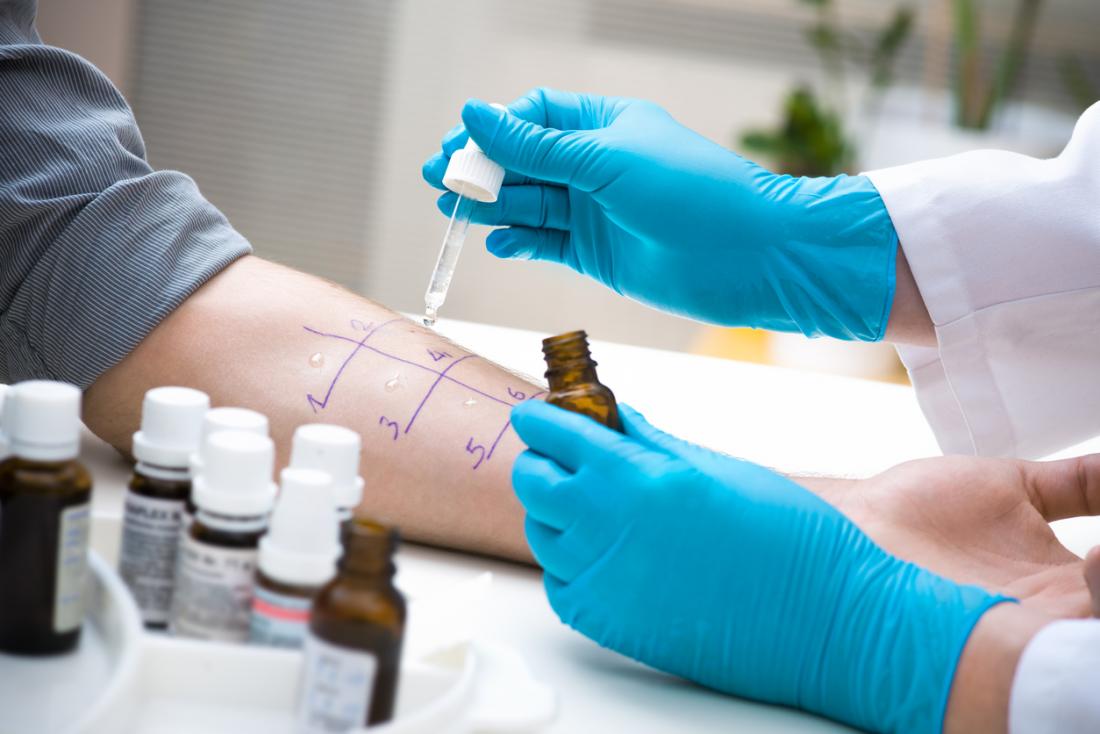 A pinprick test can identify what is causing the allergic reaction.

To specify the correct treatment, a doctor will look at the symptoms and ask about personal and family medical history.

A blood or skin test can identify which substance the patient is allergic to.

In a skin test, the skin is pricked with a minute amount of a known allergen.

A blood test will show the level of IgE antibodies. This will be high if an allergy is present. The test takes about 20 minutes.

Another skin-prick test involves injecting an allergen under the skin and checking for a reaction around 20 minutes later.

What is hay fever?

Hay fever is an allergic reaction to airborne substances, such as pollen.

An allergy happens when the immune system mistakes a harmless substance for a harmful one, and the body releases chemicals to fight it.

This reaction is what causes the symptoms.

Allergens are often common substances that the immune system in most people either does not react to, or reacts only mildly.

However, some people require treatment, because their symptoms make it difficult to complete their daily tasks.

Treatment may not eliminate symptoms, but it can reduce their impact.

An individual cannot prevent the development of an allergy, but people who experience hay fever may find some strategies useful for minimizing the impact.

Here are some tips:

Hay fever occurs when the immune system mistakes a normally harmless airborne substance for a threat.

The body produces an antibody called immunoglobulin E (IgE) to attack the threat, and it releases the chemical histamine. Histamine causes the symptoms.

Seasonal hay fever triggers include pollen and spores that only cause symptoms at certain times of the year.

Examples of hay fever triggers include:

Other triggers include pet hair or dander, dust mites, mold, and cockroach dust. Irritants that can lead to symptoms of hay fever are cigarette smoke, perfumes, and diesel exhaust fumes.

Some factors increase the risk of hay fever.

Genetic factors: If a close family member has hay fever or another allergy, the risk is higher.

Gender and age: Before adolescence, hay fever is more common among boys, but after adolescence, females are more affected.

Second-hand smoke: Exposure to cigarette smoke during the early years of life increases the risk of hay fever.

Other factors include being the firstborn, coming from a smaller family or a higher-income family. These last three risk factors may be linked to childhood infections.

An infant who has had fewer childhood infections may have a higher risk of autoimmune problems later in life.

There is currently no cure for hay fever. However, symptoms can be managed during the times of the year that have a high pollen count.

For treatment to work in the first year, treatment should be commenced 3 months before the season in which pollen spreads.

Continued treatment can have the effect of reducing symptoms, improving immunity to the allergen, and enhancing the quality of life. Three years of treatment has been shown to lead to long-term desensitization against pollen.

However, if symptoms do not improve significantly after one year, treatment should be discontinued as it is unlikely to work.

Hay fever can become more serious, moving into the lungs and developing into allergic asthma. People with a pollen allergy can also become more likely to develop other allergies, such as food intolerances.

Severe hay fever can also make the mucous membranes of the nose more sensitive to other irritants, such as cigarette smoke or dry air. This can lead to sinusitis. 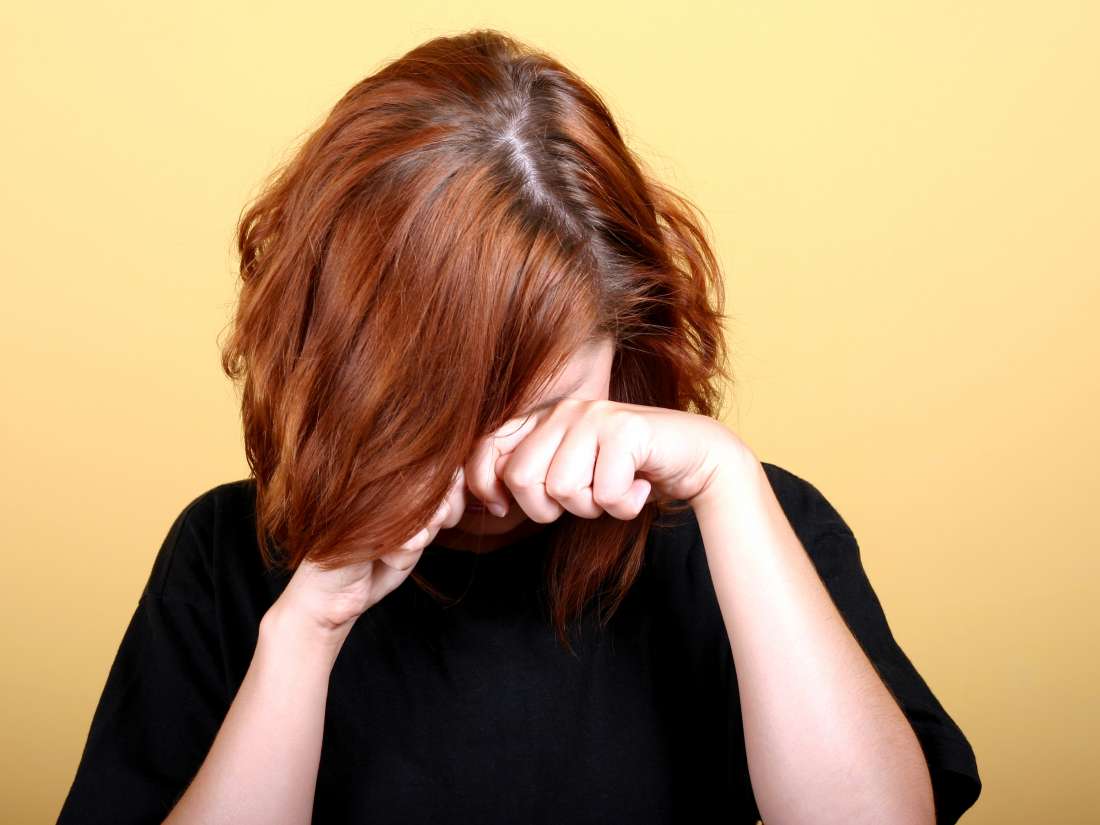 How to get rid of an allergic reaction on the face An allergic reaction on the face can cause symptoms, such as red, raised bumps, swollen lips, and wheezing. They are often caused by beauty products or hay fever. Treatments include antihistamines, cool compresses, and corticosteroid creams. Reactions can be prevented by avoiding allergens and taking antihistamines. Read now 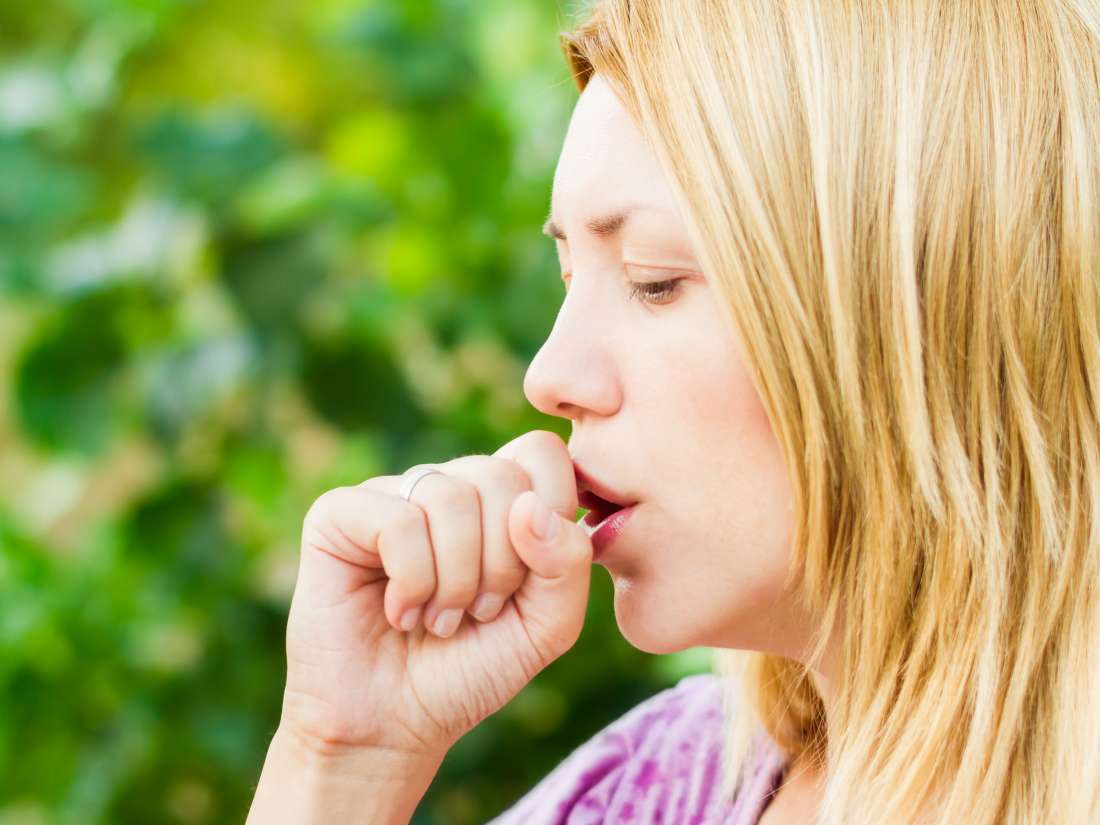 What is a hay fever cough? Hay fever is an allergic reaction resulting in cold-like symptoms, including a cough. Learn about types, prevention, and a range of treatments, here. Read now 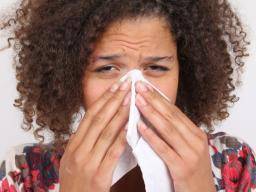 Seasonal allergies: tips and remedies In this Spotlight, we investigate what causes seasonal allergies and what the best strategies are for avoid their debilitating effects. Read now 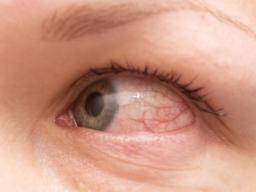 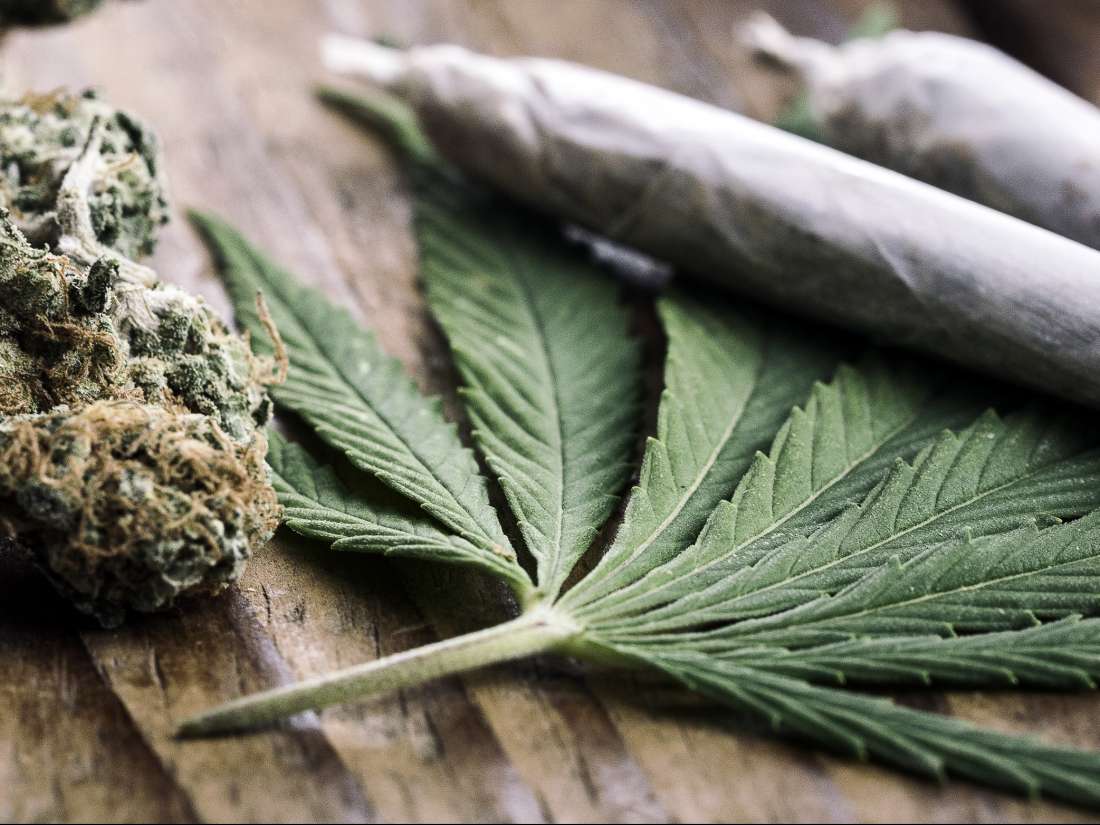 Can you be allergic to marijuana? A person can develop allergies to marijuana, as with other plants. This can occur after touching, smoking, or eating cannabis products (edibles), or inhaling the pollen. Symptoms are similar to other allergies, including sneezing, a rash, and itching skin. A person can also have a reaction to cannabidiol oil or CBD. Read now
email email
print
share share
Seasonal Allergy
Allergy Ear, Nose and Throat

Plen, L. C. (2005, October). How long can my patient use intranasal steroid sprays? One minute consult 7212, 1079-1082. Retrieved from http://www.clevelandclinicmeded.com/medicalpubs/ccjm/december2005/pien.htm